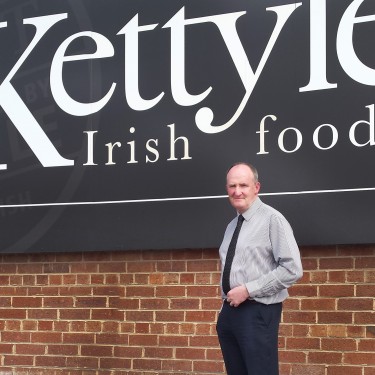 PJ McCague has recently been appointed as General Manager of Kettyle Irish Foods, part of the Linden Food Group, which is based in Lisnaskea County Fermanagh.

PJ was previously employed as General Manager with McCarren Meats, a Pork & Bacon factory based in Cavan Town. Over the years PJ has worked in a variety of rolls within the Snack Foods industry with Largo Foods Ltd. based at Gweedore in Co. Donegal and Ashbourne, Co. Meath.

“PJ will bring a wealth of experience and knowledge to Kettyle. He has a very strong track record in the industry and we hope to benefit significantly from his time spent networking in the areas of County Monaghan, Cavan, Donegal and Meath. PJ’s appointment is another significant progression in our strategic growth plan.”  said: Maurice Kettyle – Managing Director Kettyle Irish foods

Speaking about his recent appointment PJ commented: “I am delighted to have joined not just Kettyle, but the Linden Food Group with its strong reputation for quality, innovation, NPD and for generally being a progressive participant in the food industry on the island of Ireland. Kettyle themselves are a market leader both domestically and further afield and I believe are perfectly positioned to achieve our very ambitious sales targets for 2016 and beyond.  I am now very proud to be part of that Kettyle tradition and I look forward to the challenge and successes that this role may bring.”