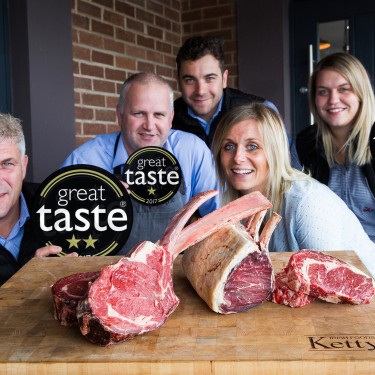 Great Taste, the world’s most coveted food awards, which celebrates the very best in food and drink, has announced the Great Taste stars of 2017. Out of over 12,366 products to be judged, Kettyle Irish Foods, part of the Linden Food Group was awarded five 1-star Great Taste awards for their Salt Moss Aged Dirty Steak, Super Aged Yearling Tomahawk Steak, Salt Aged Ribeye Steak and a Dingin Boozy Brat Sausage. In Addition to receiving three 2-star Great Taste awards for their Malt Keg Beef Ribs, Hop Fed Bishop’s Cape Steak and the Hop Fed King Arthur Rib of Beef, with some of the judges accolades calling them ‘Outstanding’.

Kettyle are no strangers to Great Taste success and now are one of the leading artisan food companies in Northern Ireland boosting a cabinet full of stars. Based in Lisnaskea, Co. Fermanagh, Kettyle Irish Foods also known as the Dry Aged Company, have set the standard for gourmet hand-butchered Salt Aged meat for over a decade. The maturation, craft and knowledge of yesteryear butcher cuts leads to a much more exciting catalogue of butchery that will lead Kettyle into the next decade.

Maurice Kettyle – Managing Director of Kettyle Irish Foods remarked: “We are delighted with the outstanding Great Taste results. The recognition from the distinguished panel of judges are a testament and a reflection of the passion and dedication to our craft. Great Taste is widely respected and acknowledged as one of the highest accolades for artisan foods. Our successful products this year have been the result of continuous development and innovation with a desire to produce exciting mouth-watering food”.

Maurice continues; “It has been an exciting 12 months for Kettyle, we have been extremely busy promoting several new products to market and have enjoyed collaborating on some uniquely Irish food. Our malt keg beef ribs and our hop feed king Arthur rib of beef have truly set a new level for kettyle”.

There were 12,366 Great Taste entries this year and of those products, 165 have been awarded a 3-star, 1,011 received a 2-star and 3,171 were awarded a 1-star accolade. The panel of judges included; chef, food writer and author, Gill Meller, MasterChef judge and restaurant critic, Charles Campion, author and chef, Zoe Adjonyoh, baker, Tom Herbert, and food writer and baking columnist Martha Collison as well as food buyers from Fortnum & Mason, Selfridges, and Harvey Nichols. These esteemed palates have together tasted and re-judged the 3-star winners to finally agree on the 2017 Top 50 Foods, the Golden Fork Trophy winners and the 2017 Supreme Champion.